Making an egg house may seem eggstreme, but Peg was eggstra determined that it would be done. Egward, the Egghead as he is known to the outside world and is also Peg's husband, wasn't so eggstatic about the idea. However he decided if he could have his very own space to do his research, he might get his theory published. (That's The Big Egg Theory - more on that later.)
It all started back in 2013. Egward was the lead scientist for the egg factory at The Mushroom. After a tour during the factory open house, Peg asked Egward about how The Mushroom was made. She started eggploring how she could get the house of her dreams.
Once she had some good eggsamples of what she wanted, she went looking for a builder or contactor to do the work. She asked all her friends and even interviewed a couple. But no one wanted to go to the eggstreme she wanted. One of them even laughed in her face and said that such would eggceed the laws in the area and it couldn't be built. When she was just about believing her new house would be eggless, her husband noticed how un-eggcited she had become. He asked her what the problem was and when she eggplained, he said I have just the thing. Why not ask the builder of The Mushroom? So she did.

Like I said, that was back in 2013 that the builder started.
In 2014, the egg was put in place and the deck was added.  Peg thought it was really going to be finished, but alas her builder continued to be eggtraordinarily slow.
In 2015, due to several minor earthquakes, the egg shifted. But some landscaping was done. Her husband was walking on eggshells by this point as Peg was so shell shocked that someone would insist on finishing the landscaping before letting her move in.

Just when she thought she had egghausted all hope of getting her egg house done, her builder came back in 2018 and started working on it again.
It was re-started with complete landscape removal and even an eggcavator was brought in to open the side of the hill to give Egward easy eggress to his lab as he was calling it now. 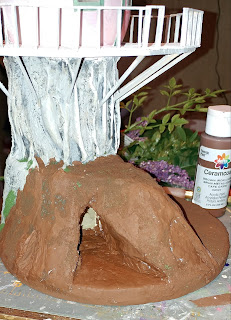 A craft knife was used to cut into the hill and open the doorway to the inside.
A doorway was cut from the inside and a custom door was added. 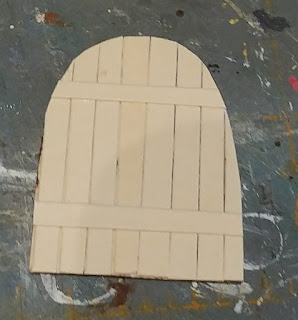 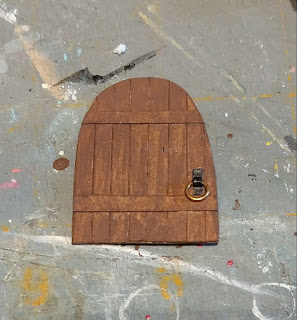 The door was made from strips cut from card. The handle is a jump ring, the 'leather' strap is paper. The very faint yellow numbers below on the mat are indicating an inch in between them. 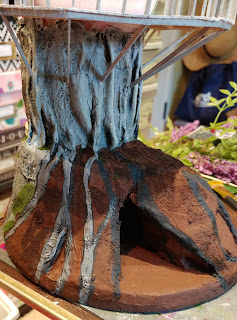 Next came some repainting of the roots to make them stand out again.
Peg was beside herself when she saw the lines. She thought the builder eggceeded her abilities with getting the stump to regrown roots, but once she saw the results she was eggstatic.

The ladder/staircase was made using white floral wire.
Peg went round and round with the builder, but the builder stood firm. She wasn't going to get a spiral staircase. The builder reminded her that when the deck was put in this had been eggplained and she had agreed it wouldn't work in her budget. Egward was worried about all the eggercise that would be required with the ladder, so he was super thankful for his ground floor eggit.
She started feeling a little bit eggcited every day as she saw the landscaping being added. 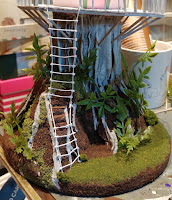 Finely ground foam (train landscape supply) is used as grass and some faux plants were cut apart for the larger vegetation.
After all the landscaping was done, she was so very pleased with how eggstravagant it looked.
Earlier in the year, the builder had pulled some furniture from storage that Peg could pick from. They agreed upon a basic layout and then the builder whisked them away until they could be moved in.

These pictures were very helpful in figuring out what was to go where and what was left to make or find.
Peg wasn't much of an interior decorator, so she was anxious to see the eggtraordinary results of the her builder's imagination. At this point, Peg felt like an eggpectant mother again. 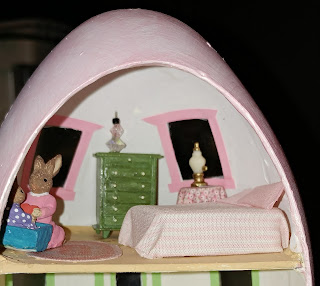 Resin rabbits - repainted after base removed, BPF lamp and chest of drawers, skirted table and bed made by Preble, the bottle on the chest was a swap, as was the oval rug by Laurie Parker
Finally, much to Peg's delight it was coming together and they started to move in. First was the upper room that was the bedroom. That's Peggy Sue, Peg's oldest playing with her youngest cousin Sugar. 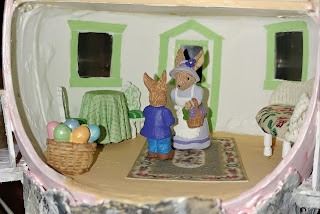 Resin rabbits and basket of eggs - repainted after bases removed, skirted table and wicker couch made by Preble, the chairs were brass colored pendants that the hoop was cut off and then repainted, rug was a swap from Gina Clark in 2009
Next was the main floor with a place to entertain. She was eggtremely pleased with the custom wicker sofa her designer made. However she was disappointed that she wasn't home when Ms. Violet stopped by.
Peg's son, Rowland, told her that Ms. Violet was so taken with the matching chairs going on and on about how eggquisite they were. He said she wanted to know where they came from, which he thought was rude to ask, but told her anyway. 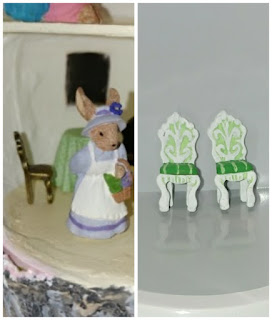 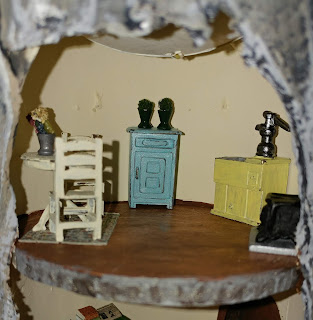 BPF- painted and antiqued for that perfect aged look, the potted plants and vase on the table were swaps, the paper rug was a printie
Next to come together was the kitchen. Peg was eggcited by how the sink looked so sunny side up, a perfect compliment to the robin's egg blue of the ice box. 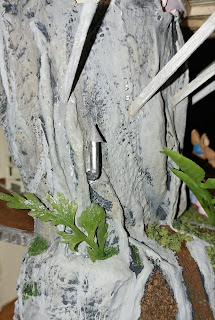 Scrap plastic from a kit was used for the pipe and the cap is paper. Painted using an exterior use craft paint.
Even the little stovepipe for the stove tickled Peg's fancy as it just blended right in with the trunk. 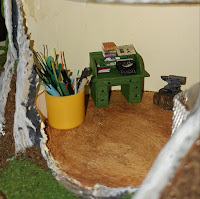 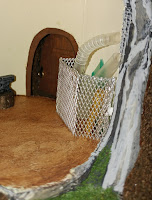 Desk and anvil are plastic and from Preble's dad from some train assortment. They painted really well. The books and newsprint were swaps. The typewriter a metal mini that was painted. The barrel is a lip balm cap with assorted wood, metal and plastic bits. The fence is wire mesh bent to shape with bits of plastic, foil, etc.

Meanwhile in Egward's lab, it was starting to fill up with all of his purchases from eggBay over the years. It was Peg's idea to find some way to contain them. Peg had always talked about how eggcentric he was but knew he was an eggpert in his field so she didn't mind the stuff, just hated the mess. 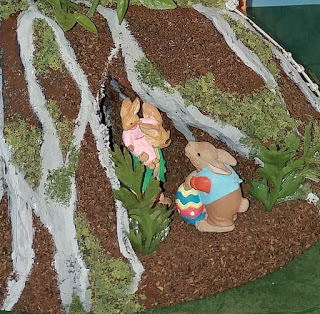 Egward didn't care as he just wanted his own space and the basement was fine with him.  Not having to eggsplain his eggperiments to anyone until they were fully hatched, gave him eggtreme relief. He eggpecially loved his tunnel. He had both a quick eggit and his own private entrance for those eggtra special deliveries. (Nothing illegal, just secret.)
Or for those times when his colleagues had a problem and stopped by. Today it was his good friend Jack who said the eggponentialer at The Mushroom wasn't working right. Seemed it was cracked and The Mushroom was going to be eggless if it wasn't fixed right away. He brought an eggample of what was happening.
Egward was semi-retired and using grants to fund his research, but still did consulting work for The Mushroom. Egward told Jack that it must have eggceeded it's eggceleration and would need to be replaced.
"Jack, would you mind waiting while I take Eggeltina to her uncle? Then I can get you something for the eggponentialer," Egward said.
"Sure," responded Jack. 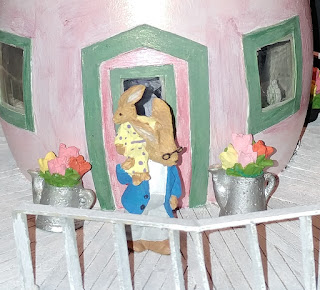 Egward found his twin brother up here on the balcony. He has daughter, Suzette, with him. "Hegward, would you mind watching Eggeltina for me?" asked Egward.
"Of course not, I would be delighted," replied Hegward. "She and Suzette can play up here on the balcony at the table or go find her cousins to play with." The pot and watering can of flowers are resin, repainted. The table and stools were from a swap. I did repaint and sand the top.
"I hear them under the balcony," said Suzette. "Let's go find them Eggeltina." 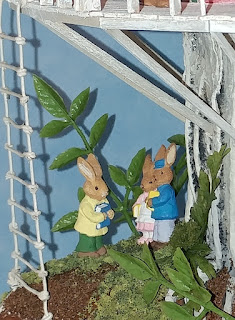 These rabbits were together in a row, but when the base was cut off the grouping was separated as well, which makes them easier to place in a more natural way.
As Eggleltina and Suzette climbed down the rope ladder, their siblings/cousins called out to them.
"I wondered when you were going to join us for book club," said Evan, Eggletina's brother.
Suzette replied, "I forgot. I guess I have egg on my face now."
Evan responded, "It will be good for your fur if you do. But anyways, I don't mind sharing my book with you."
Suzette blushed as she said, "Thanks, Evan. You are always so sweet to me."
Eggletina made a face and went to sit on the ground under a leaf. "You all need your heads eggamined.  Seems everybody's brains have been scrambled. Seriously, you bunnies crack me up. No, wait, I crack me up," to which she laughed so hard, she nearly rolled down the hill. 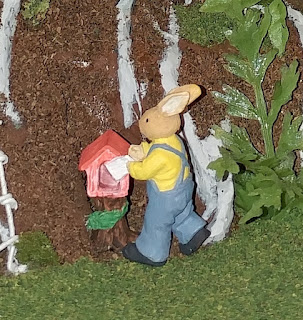 Resin rabbit with stump mailbox had base removed and then was repainted.
Further down below, Eggeltina's older brother Erwin was putting a letter in the mail.

Well, that's it for now. No, wait. I see that Peg has returned. She is meeting up with her neighbor.
"Bucky, what a nice surprise. I didn't know you had gotten back from your trip yet," said Peg.
"Yes, just this week. I'm really glad I did too, as my carrots were growing so fast. I planted them right before I left. It must have been that stuff Egward gave me." replied Bucky. 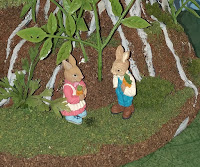 Both these rabbits were from two other different sets. The rabbit in overalls apparently I had three of as I used one already in my Scaredy Cats visit Rabbit house.

Peg responded, "Oh, did Egward share some of his Bunny Magic with you? I'm surprised as I thought he wasn't supposed to yet."
Bucky replied, "I think that is what he called it. He asked me to record a bunch of information, something about he had to have documentation or something."
"Oh look, there's Egward now. You can ask him," said Peg.
"Hi Bucky, come on around to my lab so you can give me your results," Egward said, as he blew a kiss to his wife ,who had already started over to the ladder.

Egward introduced Bucky to Jack and then they all went into Egward's lab.
"Wow, nice space you have here," said Bucky.
"I like it too," said Jack.
"Just put the paperwork on the desk, Bucky." Egward instructed.
"What exactly are you working on here?" asked Jack.
"I'm doing more research on my Bunny Magic." replied Egward. "I'm really close to publishing."
"Publishing what?" asked Bucky.
"My Big Egg Theory paper on using Bunny Magic, of course." replied Egward.
"Well, if that's what you gave me, then I want more of it. They made my carrorts grow like crazy fast," said Bucky.
"But I thought Bunny Magic was just for eggs," said Jack.
"Well, that's what I thought too. Hence my research on my Big Egg Theory."
"Will you be selling your Bunny Magic after you get your theory published?" asked Bucky.
"Oh, I bet you could get rich," Jack said eggcitedly.
"No, that isn't what I had in mind. But you never know." replied Egward. "You never know."

Well, it is time for us to go. I hope you enjoyed the story. For more photos of the overall project check my album on my picturetrail site.
at July 06, 2018

Preble, enjoyed your story and love how the egg house turned out. Makes me want to start working on my minis again!
SueB