Last week I received 50 swaps as part of the 2011 QC online convention.  (Read previous blog post for more on that.)  As I was looking at them in the divided box they are in at the moment (just the convention swaps, not into my sorted by theme boxes), I thought how neat this Halloween themed table is.  It was made by Marcia Beardsley. 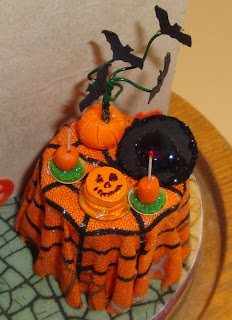 the table with hat was the swap, the extra things were swaps as well.  The candy apples were from Carolyn Petry. The pumkin face cake by Jayleen Salter. The bat tree by Kathy Barnett.

It just called to me that I needed to do something with it and a few others I got.
The more I thought on it, I decided to see what I had to display in.  I have a small dome I picked awhile back that had something in it, but I cleaned it out waiting for a mini to display. 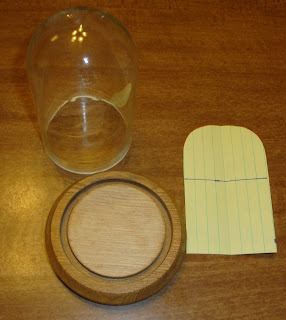 Ok, so this dome is good.  But I have this other item and it would be good for outdoors.  Mmm, could I do an indoor/outdoor scene in this dome.  Yes, I can. It is tight, but I don't have that much.
I did check my theme box and had only a few things I thought I would use.

I cut out the pieces for the dome.  I just measured and test fitted.
At first I thought well this wall is too tall for an ordinary house, so let's add a second floor.  I tried that but once I got it together and added the items to see how they would look, it was not working.  The dome is 4 inches in height and so for two floors is converted to 8 feet each section.  But the floor hanging over wasn't right with lighting and also one of the swaps I am using needs extra height (bat tree).
Another issue is I had not allowed enough room in the dome for the sides to have any trimming.  That's ok.  Have to repaper this wall due to the two floor issue, will just cut down the sides and the base.
I got all that back together and I thought, well I want to keep the round window I added to the top floor but what about the area for the outside?  Mmmm....well, this is Halloween and one decoration I have considered having in real life is a crashed witch.  I knew I had a flag pole from a swap, so I used that to test in the dome.  Yes, that will work.  Although I did decide to not use that item because I didn't want to remove the flag and also the flag shouldn't be on the pole at night without lights.
Ok, I dig in my stash to make the witch.

Here's how I made the witch:
First, I decided I would use a wire form for the body.  I have made these before and I have a gig I made because at one point I made some round tables with wire dolls.  I also had some already bent, so used that. 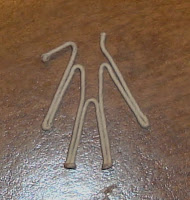 I added green silk ribbon to the legs.  (I should have painted the purple stripes on now, but didn't.)
I didn't have any black ribbon that was wide, so I used 4mm black ribbon to wrap the arms and body, gluing spots to hold in place as I wrapped.

I really wanted a black skirt, so I thought I would use the green ribbon and paint it.  Maybe the green would still be there on the inside.  (it wasn't but ok)  I glued the green ribbon into a loop and then used needle and thread to gather the circle to make  the skirt.  I added it to the body and then pulled my thread to tighten around the waist and tied it off.  (I should have painted this before I put it on her, but I am just going too fast for my own self. lol)  Before I moved on, I did make myself paint the skirt and no the paint bled through, but ok.

Next I thought about her cape.  I tried paper but quickly realized that wasn't going to drape.  I glued two strips of the 13mm wide green ribbon together.  I made a pattern from the paper of the shape I wanted (round with a big wedge cut out).  Then I applied glue around this pattern to the ribbon.  I made sure not to glue the paper to the ribbon.  Next I cut out the pattern from the ribbon.  Silk ribbon has tendency to stain from glue and I used that as my cutting guide.  Then I painted the ribbon black.  This actually gave a really nice black with green undertone.  (Should have done the skirt that way, but not going back.)  Knowing that paint can make the fabric stiff, I went ahead and put the cape on.  It pretty much stuck in place, but I glued it in the front to be sure.  I had also moved her arms into place so the draping of the cape worked as well.  I had decided she was still hanging onto her broom that is trapped between her and the pole.  Knowing that helped to determine where her arms would be.

At this point I decided I better paint her stockings.  I use a 10/0 liner to paint thin lines.  I carefully paint one side at a time. (note to self, take time to do whatever before moving on to the next step - like paint lines on stockings.)

To do her shoes I made a tiny cone that was wide enough at the opening to fit over the bent wire foot.  It fit on the ends.  I then cut a squarish bit of paper and glued to bottom of the foot and so some was sticking out past the heel.  While the glue was wet I wrapped that end around the heel and and ankle to make a boot.  I then glued the rest of the paper around the foot and left it a bit open around the ankle.  I painted the boots after glued on.  It was tendious, but I use my 10/0  brush just for this purpose.  It also helped that the legs are wire so could be bent to help get to spots.

Last I made her hat.  I started with a cone and then a circle from paper.  This is just a quick cut out of a circle.  I cut a slit to the center and then cut another circle inside it for the cone to be inserted.  I glued the band back together at the slit, then I inserted the cone.  To attach the cone to the band, I cut small slits to the band in the cone from the under side and glued those down.  Painted it all over with black.
I added pulled bunka for hair and glued the hat to the body. 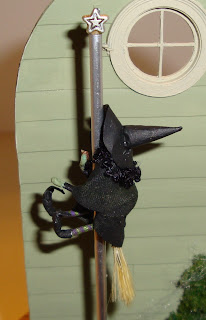 Her broom is a wood stick and some straw or grass.

To make the pole I used a hollow tube I had on hand.  I bought one of each of several sizes a while back just to have on hand.  First time I've used them.  To cut the tube without crimping it, I gently squeezed to score it with my wire cutters and continued this scoring while rotating it.  Then I was able to snap it apart and it didn't bend/crimp. yeah.  The top is a star bead, I used a toothpick to connect it and trimmed then painted the toothpick.  It is inserted into a cardboard circle for a base.  I covered the base at the same time as the wood base of the dome using landscape foam.  I didn't want to drill a hole for the pole and wanted the base to blend with the grass.

Next I added siding to the outdoor.  I used some 40 lb weight paper.  I used my cutterpede (a scrapbooking tool for cutting paper) to quickly cut the strips for siding.  Once dry, trimmed the outside and the window.  Painted the siding and also the edge of the wall.
Painted the window and glued in place. Also cut a interior window frame and painted it.
Here is the completed outside 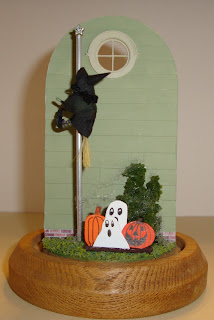 Note the spiderweb in the bushes and to the pole.
The ghost and pumkin cutout was another swap from Denise Sanders that helped inspire me to do this as an indoor/outdoor project.

For the inside, the flooring is a paint sample picked up at a local home improvement store showing the crackle finish.  The brick trim is a leftover from the attic project.  Wallpaper is some from my stash, think it is real life wallpaper and was from a materials swap.  The window is by Grandtline.
Here's the finished indoor side. 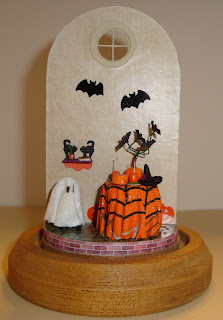 bats on the wall and pumpkins at the floor are from prior convention and are confetti, the ghost is a prior convention swap, it is very simple - fabric over a wire frame and draw on eyes.  Cute.  The cat shelf was made by Susan Watkins.

Hope you enjoyed my little scene and my how to's.  Please feel to leave a comment, if blogspot will let you.  It is annoying the way it works.
at November 19, 2011

Preble, she is fantastic, and a lovely giggle too. Thank you for the tips on making her and sharing with us.
mini hugs
Paulie

Preble, she is fantastic and a lovely giggle. Thank you for sharing with us all the steps and I'm certainly going to try making a little person from your instructions.
mini hugs
Pauline

She is just great. LJ