I have wanted to do an egg house for a very long time.  I have considered several variations of this over the years. Initially I bought a big but short sided rectangular basket for a base as I wanted to make a village with multiple houses.  This would work in 1/144th but not 1/4".  So the basket was given away.
Later, I think, oh I can use these plastic eggs.  Just regular size eggs, but then I get out my ruler and the size is too small.  I couldn't put more than a chair in those and how can a 1/4" bunny person stand up in it?  So that idea gets tossed as well.
Lately, I have been planning my thoughts on paper.  Just a simple sketch, adding notes about details I want to add.  I sketched an idea for my latest idea of an egghouse.  Based on that sketch, I went through my stash.  Sure enough I had several egg shapes available.  One was a L'eggs (old pantyhose container) egg.  I went so far as to glue the two halves together.  But then I decided it was bit small.  Next consideration was a plastic egg already had a hole cut in it.  It was ok, but looked at my other options.  A paper mache egg also was pre cut.  Nope, then lastly was a plastic egg that the opening was around the oval or side as opposed to around the middle like the typical plastic egg.  This egg was larger than the other 3 and has a clear half and not clear other half.

This egg house needs something to hold it up. My sketch was to have a tree trunk.  This became something that was open and would be in addition to the egg having living space.  That solved a problem that the egg was still small so not enough room for more than a stove and chair.

When I started this I was working on more than one project at the time as I was doing similar things.  For example for the Mushroom house I was using an ice cream container as a starting point for the stem and for the egg house for the trunk. 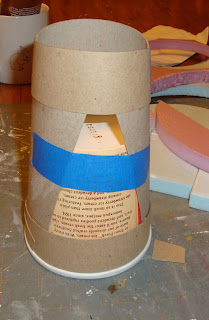 Here I have drawn a line to determine where to reshape the opening. 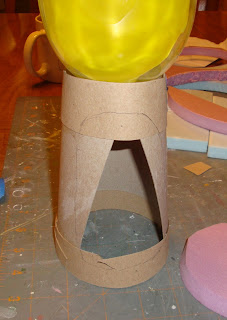 Notice the extra cardboard to make the shape and to the side is a circle cut from builders foam to go inside.
This picture shows test fitting inside the dome and how it might sit on the base. 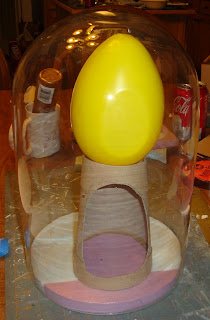 Test-fitting made me realize this wasn't the right trunk yet.
My new trunk was made using a manila folder and I didn't have to add extra pieces to wrap around.
I actually made a shorter one as had decided it would sit on several layers of foam to raise it up. 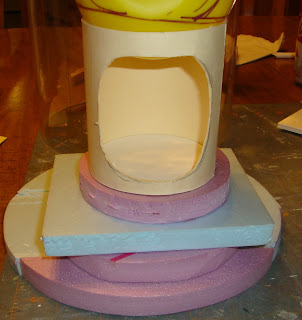 notice that the egg has a line on it.
Here's how I got that line - used a mug to draw the line with a sharpie.  Later I used isopropyl alcohol to remove the sharpie 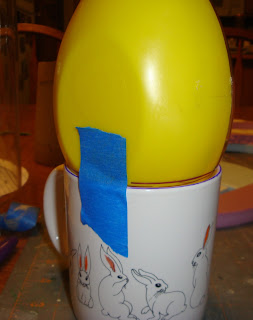 After setting the egg on the short trunk and on the layers of foam - I realized I could still have my tall trunk and the layers.  By cutting into the layers I was able to insert the trunk down in them. 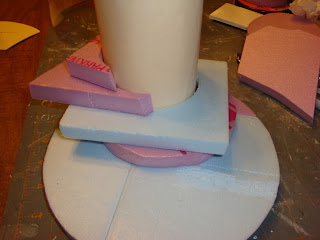 Here can see the back view of all that cutting 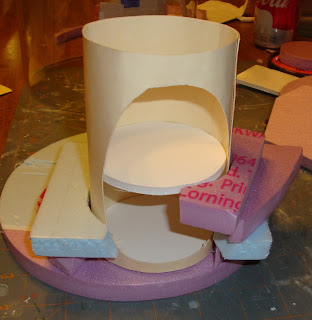 Along about now is when I should have been deciding on where the electrical would go.  But no - I can't seem to think that far ahead.  I am sure it was because I was thinking I would not include electrical but that is really crazy thinking now that we have these wonderful LED's.

After more trimming of the foam - I was ready to add the plaster cloth. 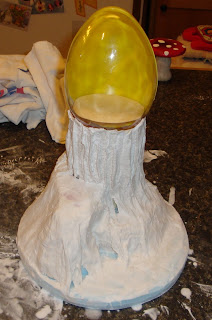 Here is the back after adding the plaster cloth 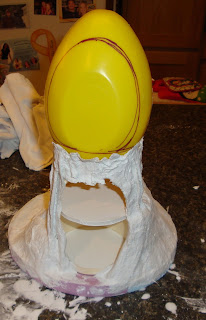 At some point between these pictures, I cut the opening in the back of the egg. Then  I painted the stump and that's when I realized I wanted to light it.
I added 4 lights. 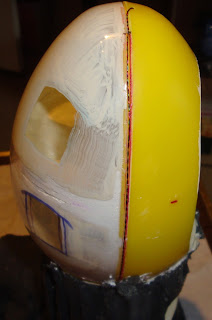 For the top floor the wires ran on the outside of the egg in the groove where the two halves go together.
The lower floor of the egg has the wire going up the side and I covered it with spackle. The wire along the ceiling is hidden by a thin card with a hole in the middle.
At the bottom of the egg I drilled another hole for the floor below the egg. 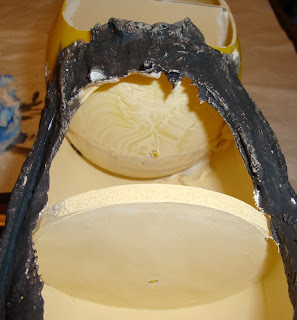 The lowest floor then also has a thin card for the light.
The wires for the trunk floors was hidden either with spackle, or I ran behind the plaster cloth I used to make the bark on the trunk. That is where the tricky part was. This is why we should always plan to light and think ahead for the placement of wires. 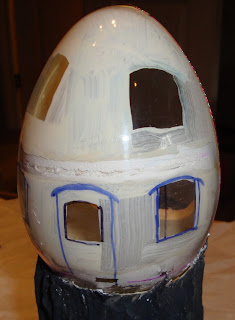 Here is the egg with my markings to tell me where to not paint. I painted the inside first. Plastic doesn't take paint well and definitely I had issues with opacity. The paint brand I used has something to do with that, but ultimately I painted the outside as well. Eventually I built up both in and out side enough so wasn't see thru anymore.
I then cut door and window trim from thin card and glued it to the egg.
I did paint the egg a matte pink and then later changed to a lighter pink with pearl finish. Same with the trim - painted it lime green and then later painted it a darker green. 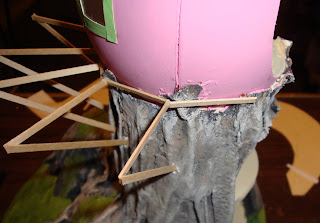 My next phase was to add the deck. I started with the pieces around the trunk. Each piece was measured and cut. The measuring was not precise. I did a lot of holding up and marking with a pencil. EVERY PIECE WAS HAND CUT. Other than having an idea of how deep the deck was going to be, I didn't measure the pieces with a ruler.
Then I added the lower brace. These I kept in mind where the deck edge was going to be. Then connected together with a horizontal. These pieces I made sure they were in line with the others. 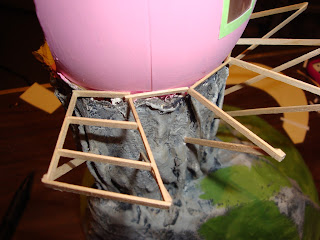 Next on the deck framing was the outer piece, then the middle pieces for support.
Here it is all supported. 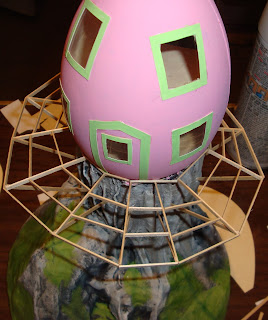 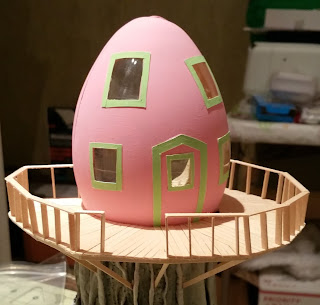 Here with the boards all added on top of the frame. I glued a section at a time, trimmed all the ends after the glue was dry.
The railing was added as a end support and then a top rail the length of the section. The between supports then added in. 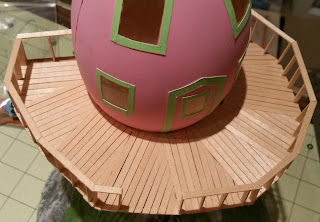 Different view - each board that was cut at an angle on the inside, was done by either eye-balling it or by marking with pencil the angle. Sometimes I had to cut again, but most time it worked. 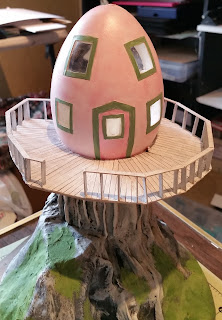 Here it is with a white wash to the deck and the new pink and green colors. The base also has been painted with green where I was adding in the grassy areas.
The landscaping is where I have gotten stuck. Last time I worked on this was in 2016.
I'm sharing this now, before this post gets any longer and so it can get published.
at February 27, 2017