My most recent project needed an extra piece of furniture and I decided to go with a piece I painted.  I ended up painting two pieces and this blog is to explain how I did it.
First I started with some pieces of BPF (brown plastic furniture) that I had in my stash.  This is great stuff to supplement quarter inch scale (1/48th) projects, but I no longer use it 'as is'.  I paint it.
Now, when I was early on into miniatures and first discovered BPF, I painted a whole house worth of the stuff but I did a poor job because I didn't prepare the pieces, I just started painting.  I still have several of those pieces that I salvaged from the project but I repaint them before using. 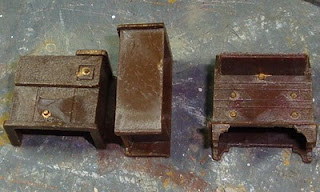 In this pic, I wanted to show a before-before.  I am going to use the piece on the right which is a desk but this was after I had already started filing/sanding and scraping on it.  The two pieces on the left show how blobbed the gold paint is and also the extra flashing that can be on this stuff.  (the middle piece in the middle along the edge has a bump).
I cleaned the piece using these tools. 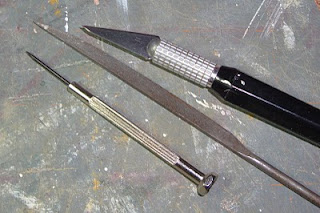 left to right: screwdriver (like for eyeglasses) that I used to scrape with in a tiny area, a wedge shaped needle file and then the sharp pointed craft knife for getting in the tight spots and scraping the edges after sanding.
I started by sanding the bumps off, sanding down any raised edges, scraping off any excess flashing (thin pieces that sticks out from the edges and is caused by a gap in the mold) and fixing any gaps if the plastic was missing by evening out the line such as an edge.  Sometimes the BPF has mold lines where is should be flat and I use a combination of these three to get it smooth as possible.  Although didn't have that particular problem with these.
I use the file to sand it down and I like that the file is thinner on one edge so can get in grooves.  It also has a wider edge that can be used to sand against a right angle.
The more fine tuning done with these tools the better the look of the finshed product.
When filing/sanding, sometimes the plastic doesn't want to release the sanded plastic and so a fuzzy edge appears.  If this does not wipe away, I use the craft knife to slice or scrape off.

This grandfather clock is the second piece I am transforming. Shown before and after some sanding/filing. The pics actually show the grain of the plastic and I didn't worry with that as I was going to paint it.  (Actually was the flash that made this stand out. Where the grain shows was actually smooth.)
In the far right, the clock face has been scraped to remove some extra bumps (over the entire face and not just the hands which I kept) that I used the screwdriver tool to get in the area. 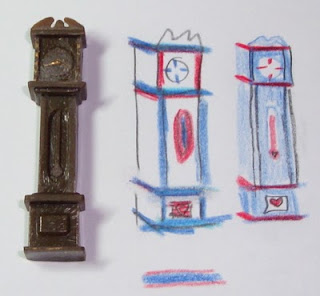 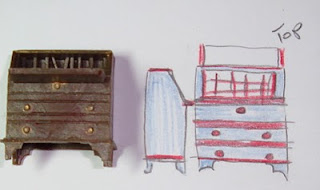 These two pics show a plan of attack with paint.  I like to do a rough sketch and then use my colored pencils to picture what the piece may look like when done.   This sketch is not about scale or looking exactly like the item, just getting the idea of where I might want to put the colors.  I do sometimes sketch multiple ideas so I don't have to repaint.

Now that I have an idea of what I am going to do, I am ready to paint.  I use acrylics and so I do several thin layers.  It is a good idea to paint and move to the next section and don't go over the first section as it might remove the paint.  This is plastic thing as the paint will be pulled up by brushing too much because the plastic doesn't absorb the paint it just sits on it.
When I paint these size items and this kind of detail, I use a 1/4" to 1/8" size brush for coverage and 10/0, 18/0 and/or 20/0 detail brushes to get these tiny spots.  (And a good magnifer to see that detail to highlight)
Paint needs to be thin but not too thin.  If it is watery it won't cover so I tend to use little if any water added to my paint.  however this blue was globby and I had to add water and later I used extender to keep the paint flowing.
Building up layers of paint requires the paint to be 'open' for awhile.  It may take a minute to paint a spot or area but as I work with each of the different paints the paint can dry up so that is where the extender helped out. 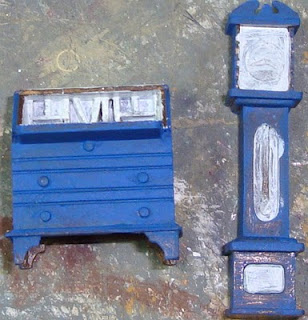 This pic shows what one coat did.  Hey I got white on the blue, no worries I just keep touching up as I go. 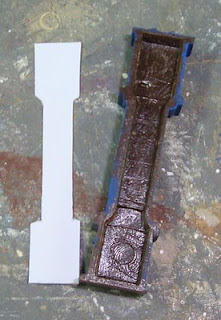 Turns out the makers of BPF like to leave what they can open.  In this case, I needed a solid back as the piece will likely be seen at times from the back. So I cut a paper (thin card would work) back and glued it on.  I choose to cut to shape, but I could have gone with a square on the bottom, rectangle in the middle and another smaller square on the top with the edges of each piece butt together.  I didn't cut this to fit exactly the back as I didn't want the edge of it to be showing on the side. 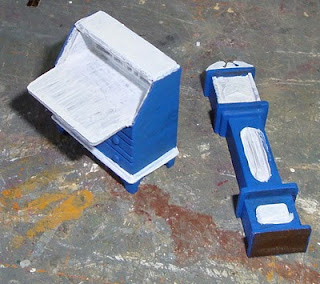 After a second coat on the grandfather clock and on the top of the desk.  It took 3 coats to get the white even.  Consider that I was covering brown with white so the thin layers had to be built up.
I choose to paint white even where I was planning to go red.  I figure it would be easier to go red over white than red over blue and I was correct.  Although a few spots changed from blue to white and then red. 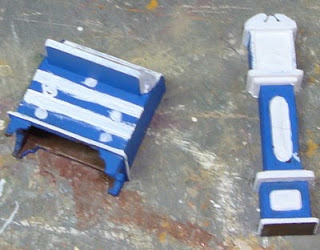 I choose to add white on top of the blue in between the drawers so several layers here. Note I have also remembered to add white to the molding on the clock.  I forgot about that at first but it was something I had planned.
I continued adding the paint in the spots I want.  I made numerous mistakes and had to cover them with the other color.  But as long as I kept the paint thinner rather than thick, I didn't have issues with build up.  Now if this was not a finished piece build up might be an issue, but I would tend to this painting after a kit is built.
All told some spots may have 6 layers of paint, but that was more because I made mistakes and had to cover them.  Either that or I changed my mind what I wanted to be what. 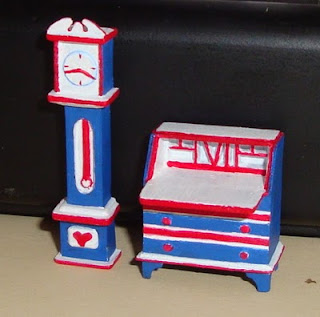 Here are my finished pieces.  I will add some accessories to the desk.  Not shown to size as the clock is under 1.75" tall.
The possiblities of ways to paint using multiple colors are endless, but a general guide is to highlight anything that might not show up if all one color.
at August 22, 2010