Decided I needed some plates to finish up my NAME Day hutch.  I checked my swaps/totes stash and I didn't have any in the right colors.  So I went to my computer were I have stored some pics of plates.  I got them from websites selling dishes.  Several years ago I made 2 china shops so had a ton of them already.  That shop was 1/144th, but I am going to make them in 1/48th scale today.
I picked out the ones I liked and inserted them as picture in MS Word.  Once in word, I resized them by formating the pic (on right click menu).  Then I used the Size tab and changed the Height.  (Make sure the "lock aspect ratio" box is checked.)
Since I am making 1/48th scale plates they ended up being 0.2" to equal apx 9" plate in real life.  Sometimes the pics were a tad larger so if that is the case, then I might resize to 0.21" or 0.22" and can make them smaller as well.  I have found that it doesn't matter the size of the orginal pic as long as you take into account whether the pic has a lot of space around the plate in the actual pic.  So if the plate and pic have the same edge then use the 0.2" for the 9" plate.  Otherwise adjust for the excess space in the pic.  (Cropping in MS Word doesn't help as the orginal size of pic is retained.  It must be the actual pic is cropped if clearing the excess around a plate.)
Next I copied this pic (several different ones actually) until I had some to fit my space plus some extra.
I didn't leave a line between rows, but if I were to print again, I would.
I printed on HP matte photo paper.  I use an HP printer and I choose the settings to match the paper.  I also set this to Best printing.  (I believe the best quality a printer will give is a combo of same mfg of printer, paper and ink and Consumer Reports articles I have read back this up.)
So here is what the plates looked like after printing. 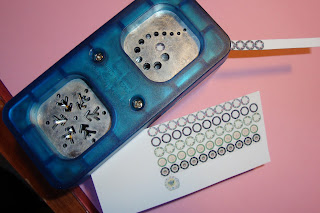 A word about punches....
Ok, so to cut a 3/16" hole that would equal a 9" real life plate I looked through my punches to see what I had.  I didn't think I had a punch the right size, but when I checked this one, I saw I might.  This is a Creative Memories punch, my mom picked up for me at a yard sale, but can likely be found on ebay... look for snowflake.
At first glance this punch is not 1/48th scale, but looking at the individual punched parts, well we have some different size circles.  This is going to work.  I did get out my ruler to determine which one would match to my needs and it was the largest circle in the very middle.
When I cut the plates from the paper I choose to cut them in a strip which can be seen inserted in the punch.  I needed to do that for two reasons.  First I printed my plates too close together, but secondly, as the punch is going to punch more than what I need so having that narrow strip gave me something to hold on to and it allowed me to avoid the other punched parts.
I turn the punch upside down so I can line up the printed plate with the hole I want to use.  Then very carefully I squeeze and punch.  sometimes I had to adjust the plate to the hole to line it up several times. When just inserting the strip the plate might look to be lined up but it isn't once the punch starts to come together.  That's why it is a good idea to have more than needed because it can happen that the punch doesn't line up even with the patience of slowly squeezing and shifting.

Now I have the plates punched.  But they are flat so here is how I make them 3D. 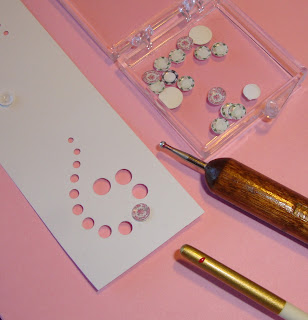 I use a double ball stylus (larger end) or the end of paint brush (another alternative is a used up ball point pen - with no ink) to shape the plate.  It also burnishes the paper and makes it shiny even though it was matte.
I used the punch to punch the actual shape it was intended and then lined up the plate over a smaller hole.  This part isn't critical as can shape the plate on a soft surface such as a mouse pad or even several layers of fabric, but I choose to use the punch part as  template.
The larger end of the stylus was used to shape and burnish the plate down into the hole of the punched area.  I did try several differnet holes and depending on the actual printed plate as to which was the best.
I used the same photo paper to punch out the full punched shape, but I could have used a thin card (like a business card or index card).  I have done this before and layered two cards together to give more depth.
In photo I hope you can see that the plates are all shaped and now glossy.

I also tried just to see what I could do to make a bowl.  I think would have had better results if I had a few thickness of the punch that I used a template.  I won't use this in this project but might later.  I think if I do, I will use wax paper (or other non-stick type surface) and glue the plate/bowl to the wax paper with paint.  Once dry it should give a ring/foot that some bowls have.  I haven't tired this yet, but what I was thinking might work. The key is to not use too much paint or even glue if it would show to be an actual part of the bowl.  Might need a touch of glue in the center and then dip the bowl in paint to help hold it up right.  Anyway just musing on what might work.

When I made my china shop plates in 1/144th, I did this exact same process I just used a much smaller punch (1/16" and 1/8".  Using this CM punch I could choose the right size.  At the time,  I didn't have different sizes so just used the soft pad.  After I did the shaping I flipped it over on a hard surface and did some shaping on the back as well.
Oval platters can be done this way as well.  I have cut them by hand, but I am on the look out for some oval punches or punch parts to have in my tools.
at October 22, 2010